Look up and enjoy the sights of weather. Since Earth’s atmosphere has air and water vapor, along with dust, pollen, and other small particles, light is often filtered, bent, scattered, separated, or blocked, to create beautiful displays. What we see gives clues to meteorologists of moisture in air, wind direction, what the temperature is above the ground, and even how much dust or smoke is in the air. 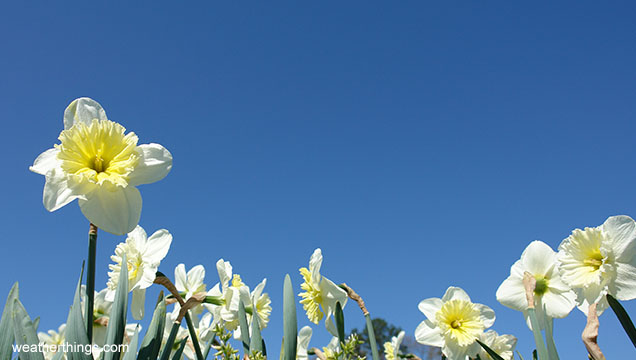 Blue is the color of the sky. From the spectrum of color arriving from the sun, the shorter wavelength colors are scattered more by air molecules than the longer wavelength colors. Blue photons are scattered the most. Once you factor in moisture and aerosols and how high the sun is, we enjoy a sky that can range from pale blue to royal blue. Looking lower along the horizon, the blue becomes more pale or white because the thicker layer of atmosphere scatters more of the longer wavelength colors like red, orange, and yellow to dilute the blue color. Without air, the sky would be black, as it is in space. Sky color and cloud color are also tinted by city lights at night. Manmade light adds a glow over large cities, known as light pollution. Low clouds reflect light back to the ground while they also show the color of lights in tall buildings.

The interaction of light with clouds creates fascinating scenes. Any thick cloud that reflects sunlight back to you appears white and bright, but when viewed from the other direction that same cloud seems dark and ominous. When you are in the shadow of a cloud it means the cloud is thick enough to block the sunlight from getting through. If a cloud is in the shadow of another cloud, it will be dark all over. Here's a demonstration to show why some clouds are bright and others are dark. Funnel clouds in the shadows of other clouds will be darker. The moisture of a funnel cloud in direct sunlight will be bright and white. Once a funnel cloud touches water or land its color will come from whatever it picks up in the circulation.

Clouds reflect the colors the sun sends so when the sun is low in the sky, clouds become yellowish orange to sometimes red or pink. When the sun is below the horizon, it can shine upward to reach high clouds, highlighting their texture, and allowing them to send shadows upward. "Red sky at night, sailors delight," is an old expression with some science behind it. It refers to often breathtaking sundown displays of longer wavelength colors like red and orange in the air. In order to see a red sky near sunset, the sky to the west has to be mostly clear. In middle latitudes, weather tends to move from west to east, signaling that the incoming weather will be clear. That would make a sailor happy! 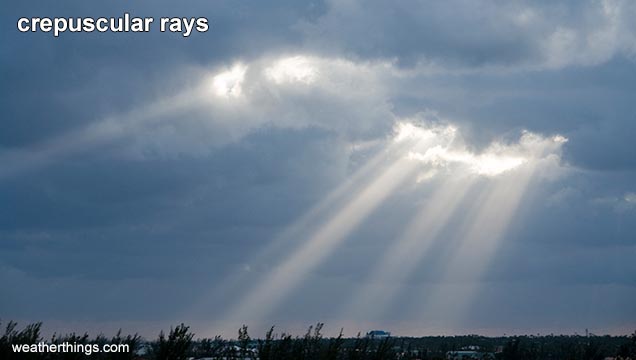 When light passes through gaps in thick clouds that fill the sky, we see rays of sunlight that seem to fan out. These are known as crepuscular rays. The beams of light are actually parallel. This is no different from how train tracks seem to converge in the distance. Crepuscular rays produce the opposite effect of cloud shadows. Instead of only seeing a darker area produced by a cloud, we see lighter areas where clouds allow light to shine through. When you look away from the sun and see the rays heading into the distance, they are known as anti-crepuscular. These are even easier to see when the atmosphere is dusty. 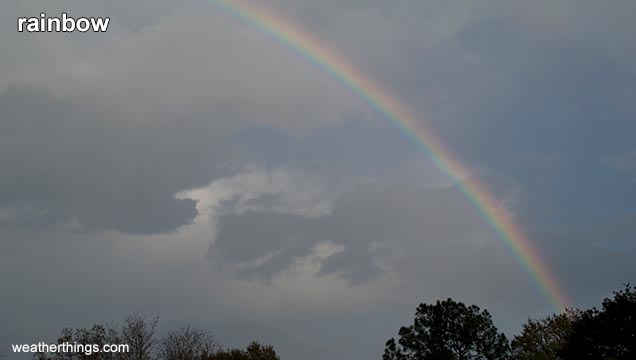 Rainbows form when sunlight shines on a curtain of raindrops. Light enters each raindrop, refracts (or bends) on the way in, bounces on the inside of the raindrop and then refracts (or bends) on the way out. The refraction separates light into its seven colors of red, orange, yellow, green, blue, indigo, and violet. The result is an arc of color seen in the direction of your shadow. The brighter the sun and the larger the raindrops, the more brilliant the rainbow appears. The middle point of the arc of a rainbow is actually centered on the shadow of your head. In the middle of a summer day, the only rainbow you can see is a manmade one, unless you are far north or south of the equator where the sun is lower. From an airplane, you can spot a midday rainbow, beneath the plane. You can also see a midday rainbow if you are very high up on a tall building where you can look down to the ground. There, it’s easier to see that a rainbow is a circle, but from the ground, you cannot see more than half of that circle. Here's a video that shows how that works. As the sun gets lower in the sky, the rainbow gets higher and wider. When you look closely at a rainbow, you'll notice the color red on the outside, with violet on the inside. This is the primary rainbow. Look for the fainter second rainbow outside the first one. On the secondary rainbow, the order of colors is reversed. It's less bright because the light takes an extra bounce inside the raindrops.

A fogbow is just like a rainbow except that sunlight is refracted and reflected by the smaller droplets of a bank of fog. It creates an arc but has much less color than a rainbow. Similar to a rainbow, a fogbow is found in the direction of your shadow. In most places, you are more likely to see one in the early morning than in the late afternoon since mornings are more likely calm, with light fog.

Refraction in ice crystals creates spectacles that are common, but not always noticeable. One of them is called a halo. A halo occurs around the sun or moon when there is a thin layer of cirrus clouds. Light passing through the ice crystals of cirrus clouds refracts or bends and is separated into the seven colors of the spectrum. Unlike the rainbow, the color red is on the inside of the ring of the halo. Also, unlike a rainbow, a daytime or solar halo happens in the direction of the sun, not in the direction of your shadow. A halo around the moon is called a lunar halo. There are many accessories to halos. Where and how they happen depends on the type of ice crystals and how they are arranged in air.

Bright spots on either side of the sun are called parhelia, which means with the sun. The nickname for parhelia is sun dogs or mock suns. Parhelia could be broad and colorful, or concentrated with not much color. 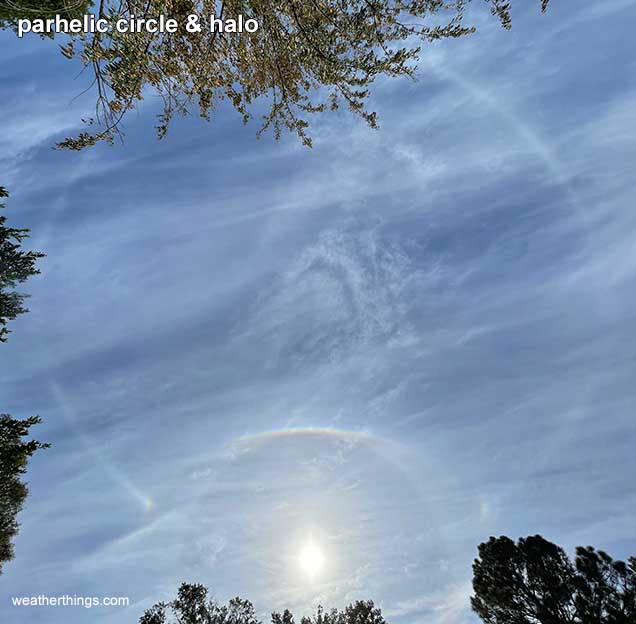 Between the sun and sun dogs is another bright arc that may form a complete circle in the sky. This larger circle is known as a parhelic circle, since it passes through the sun. If the sun and halo is high in the sky, then there may be an additional larger but fainter halo around it. Other times we find a bright portion of the wider halo beneath the main halo. This is called a circumhorizon or circumhorizontal arc. 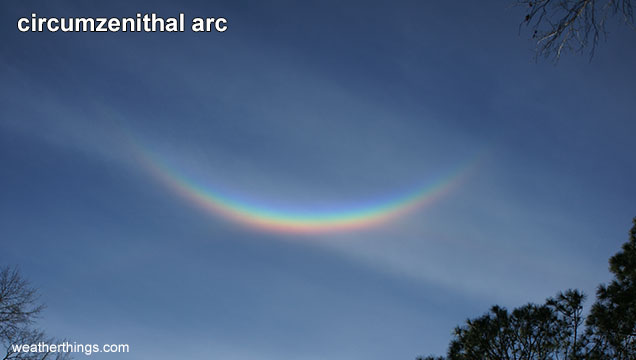 People who look straight up when a halo is in front of them may be rewarded with the sight of another inverted arc of color that is centered directly over their head. That is called a circumzenith or circumzenithal arc. It's a colorful arc around the zenith, in very thin cirrus clouds. 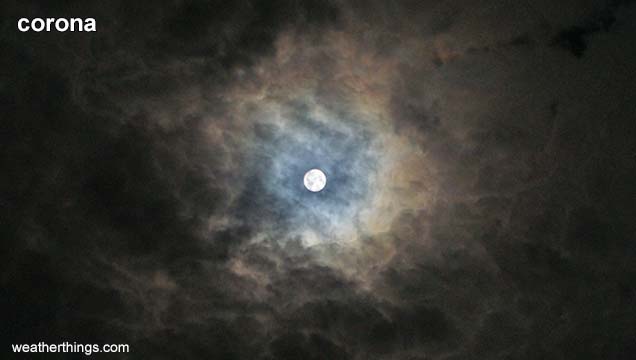 When there is a layer of middle level clouds of water droplets rather than ice crystals around a bright moon, we see a bright area of fuzzy color closer to the moon, rather than a ring away from the moon. This is called a corona. Corona means any object with a bright glow, or an object with lots of spikes. The light in a corona is both refracted and scattered. Here's the difference between a corona and a halo.

On your next daytime flight, when you are above the clouds, look down at the shadow of the plane. When you fly over middle-level clouds made of water droplets, you'll see a similar sight to a corona, called a glory. A glory is rings of fuzzy colors centered on the shadow of the aircraft. A glory forms opposite the sun when light is diffracted, refracted, and then reflected inside the individual water droplets of the clouds. 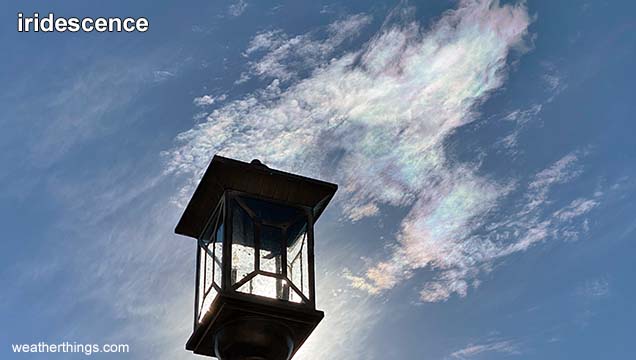 Sometimes when you look up into high clouds, you'll notice random, smooth banding of all the colors of the spectrum. That's called iridescence. Iridescence happens in high, thin clouds made of small water droplets or ice crystals that are all about the same size. Here are examples of iridescence. 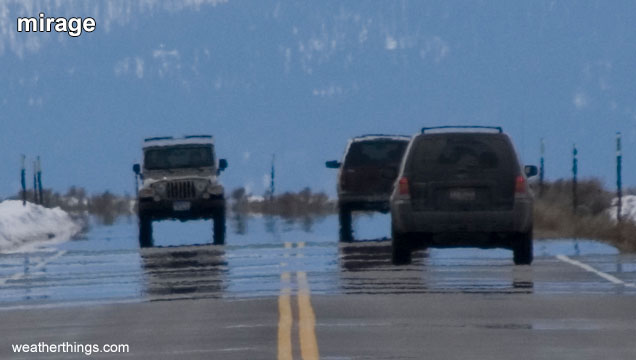 When the temperature changes fast above surfaces, light can bend or curve. That’s what we see in a mirage, like these. In a mirage, what you expect to see near the ground is often replaced by an upside down, shimmering image of what's above the ground or in the sky. On a hot road, heat radiates away fast. The huge difference in temperature on the road and just above the road creates a large difference in air density. Light slows when it passes through more dense air so the light that seems to reach your eye from the roadway is actually bending and coming from the sky. We see the sky in the road and the shimmering of rising heat makes it appear as a puddle of water. A mirage like this happens also in the chill of winter and at night, because roadways absorb a lot of heat compared to the air. When any surface is much warmer than the overlying air, you might see a mirage, or at least shimmering which is called scintillation. Along coastlines, from a distance, the trees appear to float above the water. 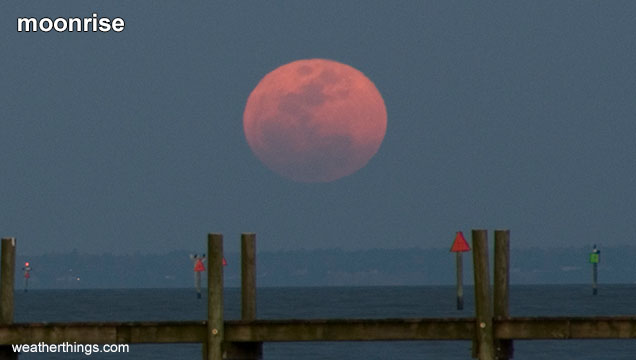 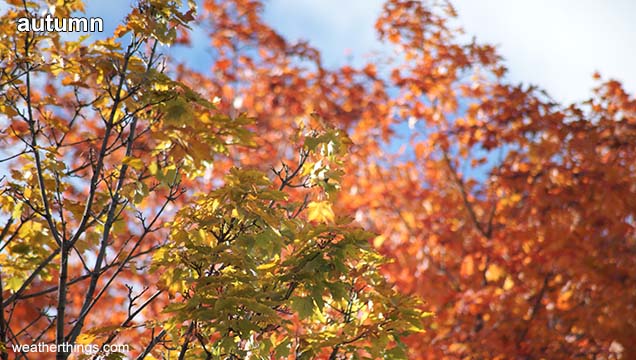 Colors in fall foliage are related to the weather, but it’s mostly the shorter days and longer nights, along with cooler conditions of autumn that control leaf color. During the warm seasons, leaves of trees use chlorophyll to turn sunlight, water, and carbon dioxide into food. Chlorophyll is what creates the green color. Many of the leaves also have yellow and orange colors but those colors are not as strong as the green. As daylight diminishes in autumn, and nights lengthen, less chlorophyll is made. Green fades away, and yellow and orange start to appear. The cooler air of autumn allows some of the leftover food in the leaves to also create a red color. How bright colors become depends on the type of tree. It also depends on late-summer and fall season weather conditions like heat, rain, and cloudiness. Frost may have a little to do with leaf color but not all trees in all places experience frost, especially before the colors change. 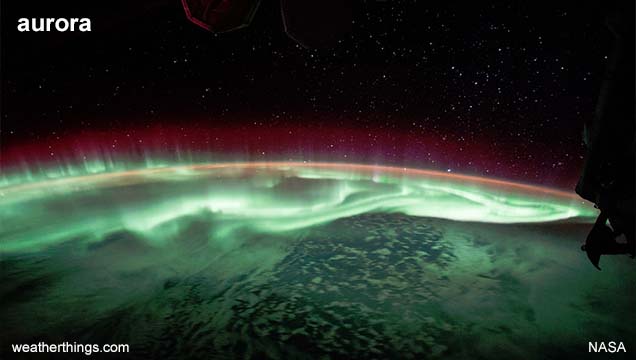 There is a colorful nighttime sky display seen in high latitudes, but it is outside our atmosphere, about 50 miles above the ground. It's caused by high-energy particles from the sun interacting with our outer atmosphere to produce ribbons and bands of color. In the northern hemisphere, it is the aurora borealis or northern lights, but it is not directly related to weather.